Blogger Rainier4311 has a piece on LTC Lakin which is critical of Anderson Cooper’s interview.  Regardless of the merits of the interview, the piece contains some interesting and uninformed comments on the military legal system.

This Article 138 discovery process must be done.  LTC Lakin now has the right to discovery based on the Articles of the UCMJ.  The United States Army is attempting to prosecute LTC Lakin just to cover their tracks because the Army has put other personnel out because of their refusal to deploy because the erroneously accused wanted proof of Barack Obama’s eligibility to be president.

In all reason, the controversy surrounding Barack Obama’s eligibility must be put to bed.  Under Article 138, he is bound by both federal laws to prove his birth, and since he is, by all accounts the Commander in Chief, he is also bound by the UCMJ.

Article 138, UCMJ, is not a discovery process and never has been.  My recollection of media reporting is that LTC Lakin received an answer to his Article 138, UCMJ, letter.  Here is his letter to the President,  letter (I noticed he uses the “Respectfully” intended for communication to a junior, rather than the “Very respectfully,” used when communicating to a senior).  The Manual for Courts-Martial (2008) contains the rules of procedure and evidence applicable to courts-martial.  R.C.M. 701 Article 46, UCMJ, and case law regulates discovery in a court-martial.  R.C.M. 405 regulates production of evidence at an Article 32, UCMJ, hearing.

Any member of the armed forces who believes himself wronged by his commanding officer, and who, upon due application to that commanding officer, is refused redress, may complain to any superior commissioned officer, who shall foreword the complaint to the office exercising court- martial jurisdiction over the officer against whom it is made. The officer exercising general court-martial jurisdiction shall examine into the complaint and take proper measures for redressing the wrong complained of; and he shall, as soon as possible, send to the Secretary concerned a true statement of that complaint, with the proceedings thereon.

It is apparent that appellant has carefully considered the legality of the orders at issue and that he has formed sincere, deeply held views about the legal basis for the deployment of his unit and the related matters of command and control and uniform arrangements. Congress has provided him with a variety of means to communicate his views to his superiors and national policy makers. He may challenge policy through a complaint under Article 138, UCMJ, 10 USC § 938; he may raise his concerns to the Inspector General of the Department of Defense, 5 USC Appendix; and he may communicate directly with Members of Congress and Inspectors General without interference from his military superiors and with protections against reprisal, 10 USC § 1034. The record indicates that he has exercised his right to communicate with Members of Congress.

Note that when the United States Supreme Court denies a writ of certiorari they don’t often say why.  Michael New was sentenced to a bad conduct discharge for among other things refusing to wear a U.N. related uniform items in preparation for deployment to UNPROFOR.

Appellant’s concerns were discussed by his father on the Internet and were reported in the popular media and noted by several members of Congress. Appellant’s noncommissioned officer leadership, company commander, and battalion commander each spoke with him to alleviate his doubts about the legality of the UNPREDEP mission and the uniform modification.

At the next formation, appellant reported in unaltered BDUs and was removed from the formation. Two hours later, he was given a "second chance" to comply with the order by Lieutenant Colonel (LTC) Layfield and refused. Appellant was then declared non-deployable. 50 MJ at 735. The order and his responses formed the basis for the charge of disobedience that is the subject of the present appeal.

Note first that this is a congressionally established mechanism for a military member to complain about actions done by his commanding officer within his unit.  Each service has a mechanism for complaints of wrongs involving non-commanding officers.  For example the Navy has Article 1150, U.S. Naval Regulations. 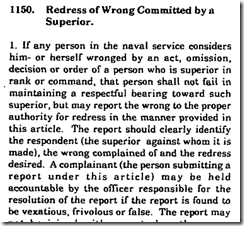 Were LTC Lakin to be Commander Lakin, he might do well to consider the language that he could be held accountable, “if the report is found to be vexatious, frivolous, or false.”  The Army I believe uses the Inspector General system.  (Note also Articles 1132 and 1133 of U.S. Naval Regulations) 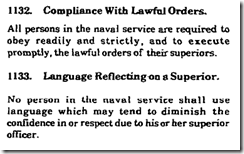 We should note that the right to use a complaint system is protected by statute.  See 10 U.  S.  Code 1034.  However, false statements or disrespectful statements in an Article 138, UCMJ, complaint are not protected.  In this context a note to prosecutors tempted to over-reach.

Although not raised as error, we will discuss one other aspect of the sentencing testimony. Appellant’s first sergeant testified for the prosecution. When addressing the impact of appellant’s offenses on the unit and the base, he testified, without objection, that, "He’s tied up time with the IG. He’s tied up time with Congressionals having to be answered, Social Actions, every support agency on this base knows AB Newson." One logical inference from this testimony is that appellant should somehow receive more punishment because he became a thorn in the base’s side by filing complaints with the inspector general (IG) complaint system or a member of Congress, an inference prohibited by statute. See 10 U.S.C. § 1034. Since this case was tried before a military judge sitting alone, we are confident he disregarded any improper inference from the testimony.

Lest the uniformed feel LTC Lakin is being punished for speaking out, that is not true based on the charges.

It is clear that to violate 10 U.S.C. § 1034, a person must initiate a negative personnel action specifically in retaliation for a service member’s communication with a Member of Congress. In the present case, there is no evidence that the Government prosecuted Appellant, and that the trial counsel subsequently introduced the letter, to retaliate for any action by Appellant. The Government charged Appellant not because he wrote a letter to a Congressman, but because he wrongfully used and distributed LSD — offenses that occurred well before Appellant even wrote the letter. In short, while there may be circumstances where the use of a congressional communication in the context of a court-martial proceeding would constitute a prohibited retaliation under 10 U.S.C. § 1034, those circumstances are not present here.

The Rainier piece agrees that, “Bringing a court-martial to bear against any person because of their refusal to deploy in these times is legitimate.”  But not for LTC Lakin?

The United States Army is attempting to prosecute LTC Lakin just to cover their tracks because the Army has put other personnel out because of their refusal to deploy because the erroneously accused wanted proof of Barack Obama’s eligibility to be president.

It doesn’t matter whether one or both parents were themselves U. S. citizens at the time.

The president of the United States is not bound by the UCMJ, unless he has a double secret commission or enlistment in the National Guard or Reserves.  He is bound to issue rules and regulations for the conduct of courts-martial in accordance with Article 36, UCMJ.  But as I’ve posted already he’s not issued any new relevant EO’s.

Let me close with the words of Dwight “ML” Sullivan:

But while I find the eligibility debate interesting, it is also profoundly irrelevant to the prosecution of LTC Lakin.