Statistics are starting to be released about suicides, primarily within the Army, showing increases in the numbers. I think it’s reasonably safe to assume that attempts as well as “gestures” have risen during that period of time.

Eight years of war in Afghanistan and Iraq have etched indelible scars on the psyches of many of the nation’s service members, and the U.S. military is losing a battle to stem an epidemic of suicides in its ranks.

Despite calls by top Pentagon officials for a sea change in attitudes about mental health, millions of dollars in new suicide-prevention programming and thousands of hours spent helping soldiers suffering from what often are euphemistically dubbed “invisible wounds,” the military is losing ground.

The Department of Defense Friday reported that there were 160 reported active-duty Army suicides in 2009, up from 140 in 2008. Of these, 114 have been confirmed, while the manner of death in the remaining 46 remains to be determined.

“I look at the numbers of each service, and that rate has gone up at the same rate across the services,” Adm. Mike Mullen, the chairman of the Joint Chiefs of Staff, told a gathering of military mental health professionals and advocates last week.

An increasing number are female soldiers, who rarely committed suicide before but now are killing themselves at a much higher rate.

Last year was the worst for suicides among active-duty soldiers since the Army began tracking those deaths in 1980. 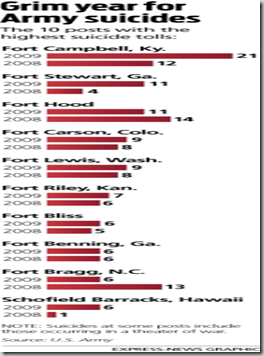 Notes Sig Christenson in the San Antonio Express-News.  And Sig’s piece shows Fort Campbell as the top.  The SAE-N chart is apparently based on U.S. Army numbers.

What I’d be interested in knowing is how many suicides, attempted suicides, or “gestures,” are military justice related.  Anecdotally, I know of two suicides (one an appellate client, and one a pre-Article 32 client), and several others with actual attempts, and a number with acts labeled gestures.  My sense is that most of these particular cases are of officers and senior enlisted.

Many units appear to deal with people in the military justice process reasonably fairly.  But there are enough units that basically cut the person off from all support, they are labeled and isolated.  The Marines seem to be the best in taking the attitude that, “He’s still a Marine until convicted.”  And after trial the Marines as a group seem better in handling the Marine.

So my question is how many of the suicidal gestures, attempted suicides, and suicides are of people within the military justice process.

With the question goes a reminder to defense counsel, and to trial counsel.  You have to be ever conscious that your client may be one of those who is at risk.  You don’t have to break the officer-enlisted barrier and become their best friend and get to first name basis, you don’t have to get all warm and fuzzy.  You have to treat clients with the respect and courtesy due any human, and be alert to signs.  This requires you to observe and listen to your client or the accused.  You should be doing that anyway, but keep their mental state in mind.