CNN: Would the charges be the same in either case?

Toobin: The wording would be different but there would be no practical difference. Most importantly, he would be eligible for the death penalty in either jurisdiction. I don’t believe there has been a military execution in a very long time. I know there are some people on death row in military court. There is no parole in federal court, but there is time off for good behavior. You can get up to 15 percent off for good behavior. 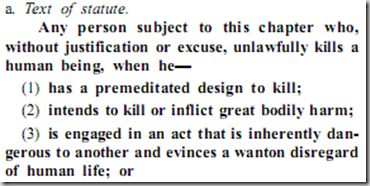 Article 119a is fairly new: 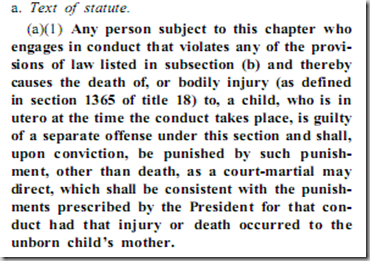 2.  The last military execution was of Private Bennett in 1961 for rape and murder.

3.  (Courtesy of DHSullivan: “Since the current military death penalty system went into effect in 1984, 15 known military death sentences have been adjudged.  In two of those cases, the CA commuted the death sentence to confinement for life.  Of the remaining 13 cases, three remain on appeal at the CCA level.  That leaves 10 cases that have completed direct appellate review.  Of those, the death sentence was affirmed in two cases and reversed in eight.  In those eight cases, the death sentence was reversed in three cases due in whole or in part to IAC (Curtis, Murphy, Kreutzer, which also involved an erroneous deprivation of resources to the defense counsel).  In two of those three cases (Curtis and Kreutzer) the original death sentence was replaced by a life sentence.  Resentencing hasn’t yet occurred in the third case, Murphy.”