SCOTUSBlog has the 3 June 2010 petitions to watch at SCOTUS.  Here is an interesting one.

Title: Jones v. Williams
Docket: 09-948
Issue: Whether the Tenth Circuit violated 28 U.S.C. § 2254(d)(1) by granting habeas relief for ineffective assistance of counsel during plea bargain negotiations to a defendant who was later convicted and sentenced in a fair trial, on the ground that the remedy the Oklahoma Court of Criminal Appeals gave to the defendant was constitutionally inadequate, given that the Supreme Court has not clearly established what remedy, if any, is appropriate for ineffective assistance of counsel in such a case. 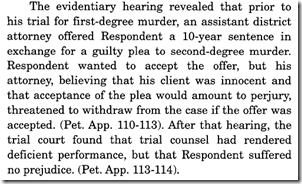