An unarmed man tried to visit the army psychiatrist charged in a deadly shooting spree at Fort Hood, Texas on Wednesday by posing as his lawyer, officials said.

When that ruse didn’t work, the man told hospital security that he was Maj. Nidal Malik Hasan’s doctor. 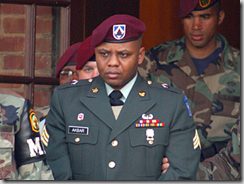 Counterterrorism blog has this link to a NEFA Backgrounder on the SGT “Major” Akbar case.  Obviously written by a non military person?  Heck, the photo shows him wearing a sergeants stripes.  The story linked to correctly describes Akbar as a sergeant.  Look at Akbar’s picture and you’ll see what looks to be the top edge of a bullet resistant vest?