World News Daily has a piece on LTC Lakin and his radio inteview with G. Gordon Liddy.  Here are a couple of interesting points from the article.

“We are today (12 August 2010) officially requesting that discovery,” Jensen said. “If the government refuses to give it to us, then we will, a week from today, file a motion to compel discovery.

“I can’t think of a single reason why the judge would take the government’s position,” he said.

Anybody got a copy of the discovery/R.C.M. 701 request they can share – how about you American Patriot Foundation?  Motions such as this are due with the court no later than 20 August 2010 per the CMO.  The prosecution will have until 27 August 2010 to respond per the CMO.  Interestingly discovery could have been requested on the day of the referral or any day after, see, R.C.M. 701.

Lakin declined to follow deployment orders after he tried through military channels to affirm the validity of orders under Obama’s command and was rebuffed. He had been scheduled to deploy to Afghanistan again.

Actually he refused and extended a challenge to be court-martialled, but that may just be quibbling with the choice of language.  What is most interesting is another reference to his prior use of “military channels.”  The military culture, IMHO, allows for situations where a person may question an order for many reason.  But, once the order is affirmed and if appropriate an explanation is given, the order must be executed.  I think there is a sufficient analogy in U.S. Naval Regulations. 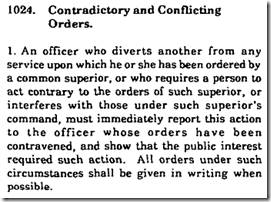 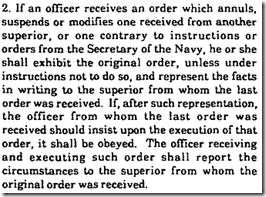 Lakin confirmed during the same interview that he’s received “overwhelming support” from many of his peers. But he was counseled by his lawyer not to discuss specifics because of the pending court martial, scheduled for October.

I have previously posted on LTC Lakin’s “as yet undisclosed strategy,” and in my gossip session with Dwight the other day I revisited my theory of his secret strategy.  LTC Lakin believes (and I’m sure he’s right) that there are in fact many military people who agree with him but for one reason or another are remaining quiet and obeying orders.  His gamble is that he will end up with a panel of such senior O-5 and O-6 members who will not convict him, or if they do convict that they will kiss him on the sentence.

It occurred to me that some context for comments might be appropriate as to how LTC Lakin is acting.  So, let’s look at this from the perspective of U. S. Naval Regulations and how the naval service (which include U. S. Marines) officer culture is set. 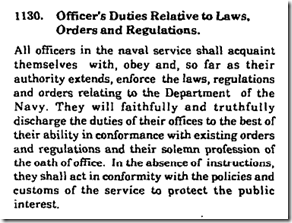 I don’t have time to research the Army Regulations, but I’d be interested in knowing if there are similar regulations or written directives on how officers should conduct themselves.