Being drunk and being incapacitated aren’t the same – no matter how hard military sexual assault trainers try to convince you otherwise.  Such training is not just wrong – it is – IMHO – knowingly false.

Which brings us, finally, to the drunk sex issue. So, is Sokolow suggesting that all women who say they were raped while they were drunk were not really raped? He is not. “If there’s a no, I don’t care if there’s alcohol involved, it’s rape. What I’m saying is the fact that a woman was drunk can’t be the sole criteria for whether she was raped or not,” Sokolow explains, “and frankly, a lot of schools were getting this wrong. There is a vast difference between drunk and incapacitated.”

Brett Sokolow, Meet the Man Telling Colleges How to Fix Their Rape Problem, The Cut, 21 October 2014.

These are words many don’t wish to hear but they are legally, and more importantly medically true.  Unfortunately military trainers persist in teaching false information about “one drink.”  This is not old news.  A number of years ago the Air Force had a sex scandal and came out with new training.  As a result of that training and other erroneous training, the Department of Defense was forced to come out with this little bit of accurate information. 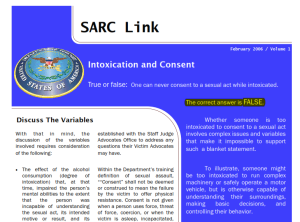 I got this off the web for www.sapr.mil back then, it ain’t available anymore on the current website – I wonder why?  The cynic tells me it isn’t helpful to the government meme.  Here is a link to the rest of the image.